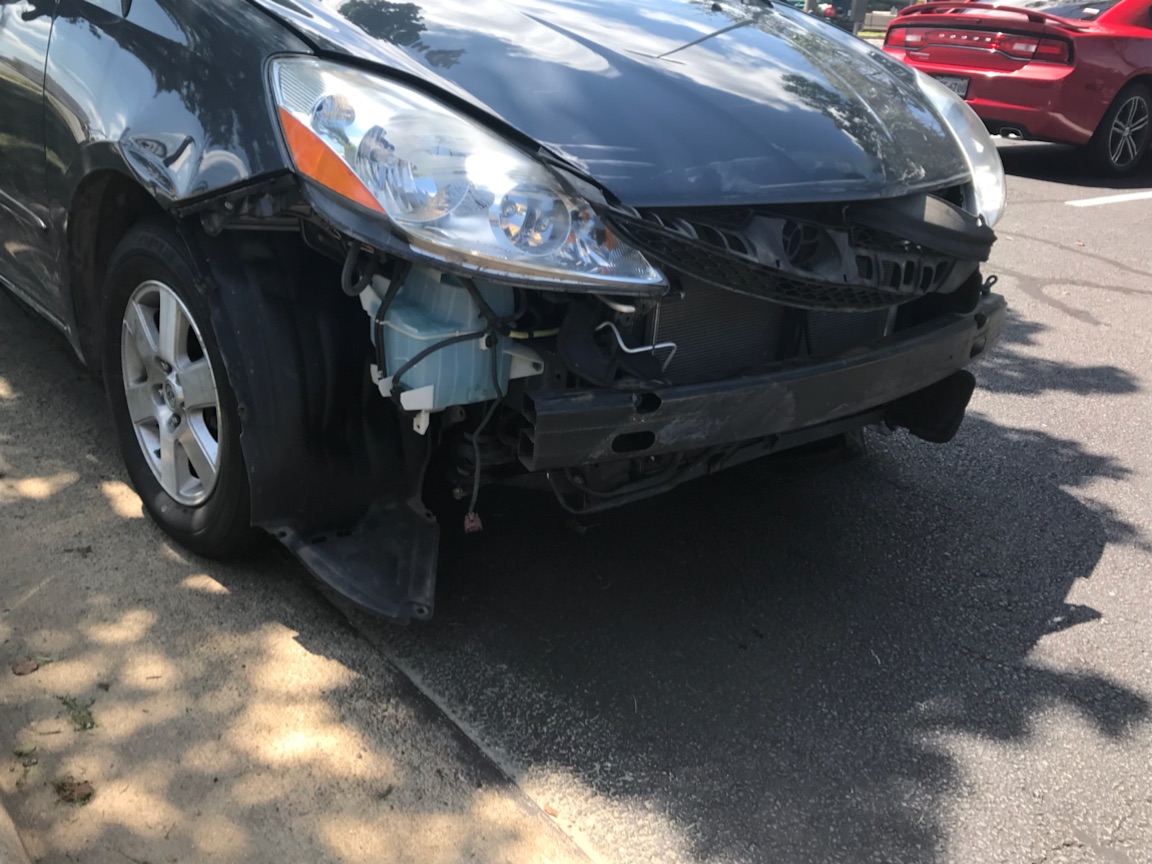 We interrupt this journey to ordination for a word from Real Life.

After two-plus years of really safe driving, including thousands of miles all alone in West Virginia last summer, David had his first accident last week.

The bottom line: He’s fine. The other guy (in the huge delivery truck) was absolutely fine. But as you can see, the nearly 12-year-old minivan has had better days.

He was turning right, out of a parking lot, and the left lane was blocked by a truck or something, so he couldn’t see. So he nosed out a little to see if it was clear, and wham, the truck tore the front bumper off before he could get to the brake.

It’s funny, we had just had the van in for its 165,000 mile service, and Chrissy told us the front end suspension was shot…the tires were beginning to go bad because of it…and (gulp) it’d be at least $3200 to redo the suspension. This is on a van that’s maybe worth $2000 at trade-in, if all the stars and planets aligned and the estimator was drunk that day. We were in the midst of discussing what to do about it, because we’d really like to get another year or two out of it for David, when oops. That decision kinda got made for us now. We’re in the process of donating the van, because it’s just not worth it to fix up or to do anything else with it. But it did point up some lessons.

One, David was really calm and handled himself very well. The truck driver didn’t want to exchange insurance information with David and called the police, who came and took everyone’s information; David didn’t get a ticket, but the officer did comment on how calmly he was handling everything. So I’m proud of him for dealing with the ugliness of the whole incident without losing it.

Two, it really did remind us that our treasure isn’t in our cars or in our stuff. I reminded David of what I had told him years ago when he first started driving: accidents where metal gets bent but nobody gets hurt are lessons. Learn them the first time and you’ll be fine. And I think he’ll approach every blind corner a whole lot more carefully now, for the rest of his life, and he’ll be telling his kids about this when he’s teaching them to drive someday.

He’s back at college now (stories about that another time), and car-less for the time being. Fortunately his roommate has a car; fortunately or unfortunately, that car’s a standard, and David has yet to learn on a stick. (Maybe Nathan will take him for a lesson.) But life does go on, even without the bumper attached.